PHAD PAINTING (NARRATIVE ART) I 9th July 11AM to 1PM

About The Craft
Phad is a religious scroll painting and folk painting practised in the Rajasthan state of India. This style of painting is traditionally done on a long piece of cloth or canvas, known as phad. The narratives of the folk deities of Rajasthan, mostly of Pabuji and Devnarayan are depicted on the Phad. The Bhopas, the priest-singers traditionally carry the painted Phad along with them and use these as the mobile temples of the folk deities, who are worshipped by the Rebari community of the region.

About The Artist
Kalyan Joshi comes from a long line of Phad painters, dating back to the thirteenth century. He started painting from the age of eight with his father Shri Lal Joshi, a Padma Shri recipient. Kalyan Joshi ji experiments with new stories, contemporary style painting and line drawing. Joshi has received numerous awards across his career, including the National Award from the Government of India in 2010, the National Merit Award by the Government of India in 2006, and the Gauri Shankar Mehta Award, Maru Parampara in 2008, and the most prestigious International Craft Awards in 2020.

About The Craft
Sanjhi is the ancient art of paper stencilling practised across Mathura and Vrindavan. The term Sanjhi is derived from Sanjhi or dusk. It is related to the ritualistic practice of unveiling the rangoli in the temples with chanting at dusk. The beauty of Sanjhi lies in its delicate designs and elaborate picture motifs. Most of the designs are compositions narrating tales related to Krishna. The craftsmen use small fine custom-made scissors to cut the stencils and then use the stencil to create the images. The rangolis were made using coloured pigments, flowers or stones.

About The Artist
Mohan Kumar Verma was born in 1971 in Mathura where he currently resides. He started when he was just 11 and now, more than three decades later, Mohan Kumar Verma is one of the few remaining custodians of Sanjhi, the centuries-old craft of turning paper into objects of art. The fourth-generation craftsman from Mathura in Uttar Pradesh is attempting to give ancient art a contemporary twist by using mirrors, frames and more intricate designs.

About The Craft
Gond paintings are a form of painting from folk and tribal art that is practised by one of the largest tribes in India with whom it shares its name. Gond paintings can best be described as ‘on-line work’. The artist makes sure to draw the inner as well as outer lines with as much care as possible so that the perfection of the lines has an immediate effect on the viewer. Lines are used in such a way that it conveys a sense of movement to the still images. Dots and dashes are added to impart a greater sense of movement and increase the amount of detail. Another very striking facet of Gond paintings has to be the use of bright vivid colours such as white, red, blue and yellow.

About The Artist
Venkat Raman Singh Shyam is a contemporary Indian artist who works with murals, etchings, mixed media and animation. Venkat has travelled extensively and exhibited his work in India and the world over. He was awarded the Rajya Hasta Shilpa Puraskar by the Government of Madhya Pradesh in 2002. He was also the coordinator for an animated film on a Gond folktale made by Tara Douglas which won the Tallest Story Competition Trophy at the Inverness Film Festival, Scotland, in 2007. 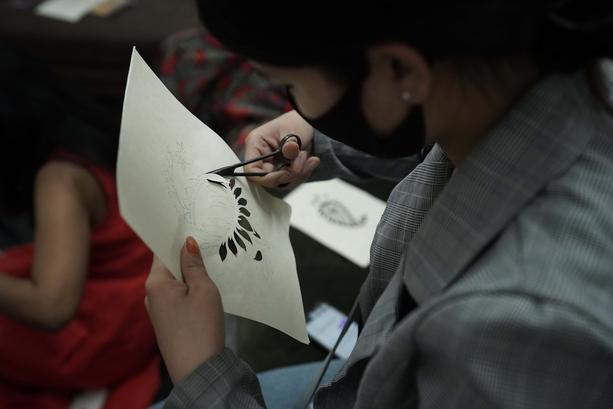 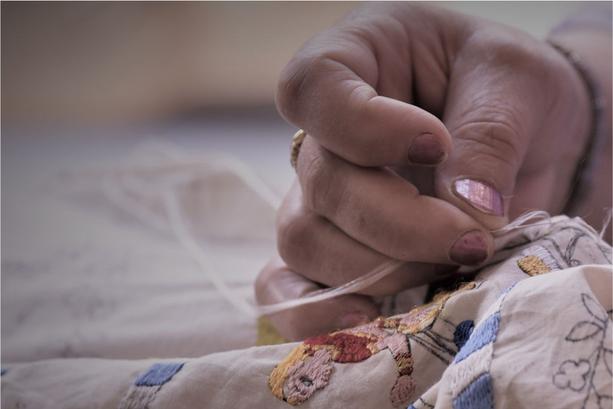 About The Craft
Kantha is perhaps the oldest forms of Indian embroidery as it can be traced back to the first and second A.D. The traditional form of Kantha embroidery was done with soft dhotis and saris, with a simple running stitch along the edges. The embroidered cloth has many uses including shawls, covers for mirrors, boxes, and pillows. In some cases, the entire cloth is covered with running stitches, employing beautiful motifs of flowers, animals, birds and geometrical shapes, as well as themes from everyday activities. The stitching on the cloth gives it a slightly wrinkled, wavy effect.

About The Artist
She is known for her finest hands and understanding in Kantha, hailing from Kolkata, she has been instrumental in giving new genre of style, motifs and stories that has created a totally outlook in Kantha Embroidery. 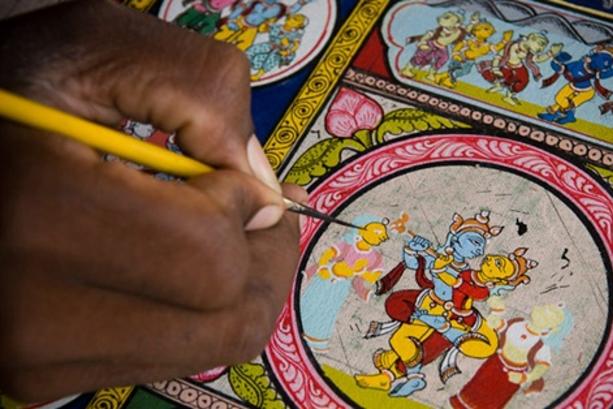 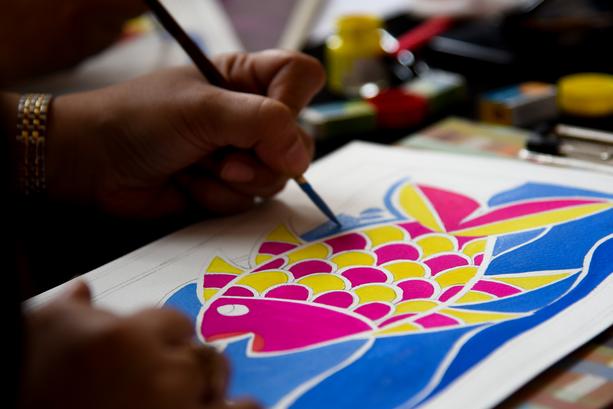 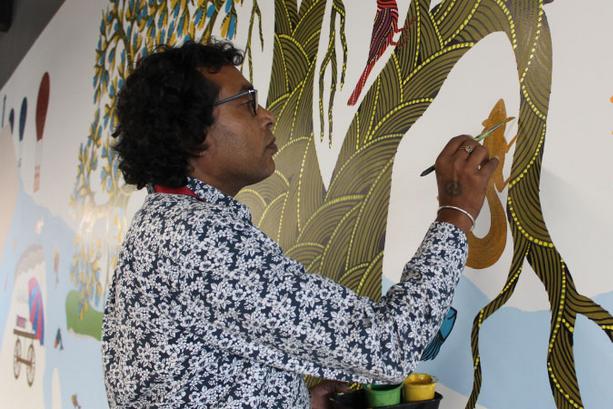 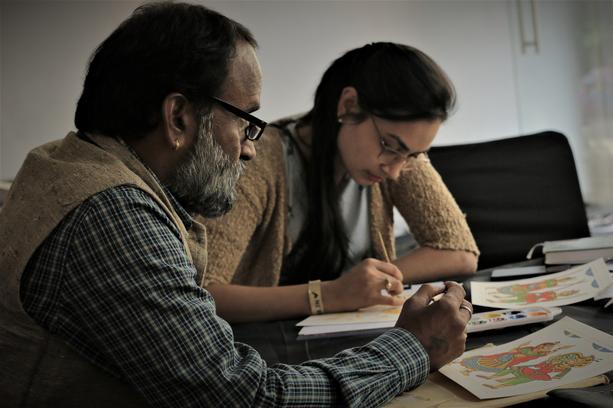 PATACHITRA PAINTING (TRADITIONAL ART) I 10th July 11AM to 1PM

About The Craft
Patachitra or Pattachitra is a general term for traditional, cloth-based scroll painting, based in the eastern Indian states of Odisha and West Bengal. Patachitra art-form is known for its intricate details as well as mythological narratives and folktales inscribed in it. Pattachitra is one of the ancient artworks of Odisha, originally created for ritual use and as souvenirs for pilgrims to Puri, as well as other temples in Odisha. The craft is a component of an ancient Bengali narrative art, originally serving as a visual device during the performance of a song.

About The Artist
One of the most prominent artist from Raghurajpur, the village known world-wide for the origin and spread of the most rare art of Orissa, the artist has done revolutionary work in Canvas and Palm leaf paintings.

About The Craft
Often characterized by complex geometrical patterns, Madhubani paintings are known for representing ritual content for particular occasions, including festivals, religious rituals, etc. The colours used in Madhubani paintings are usually derived from plants and other natural sources. These colours are often bright and pigments like lampblack and ochre are used to create black and brown respectively. Instead of contemporary brushes, objects like twigs, matchsticks and even fingers are used to create the paintings.

About The Artist
Manisha Jha is a self-taught Madhubani artist who established Madhubani Art Centre in the year 2002 to support women artists from Mithila region in Bihar. She also supports other centres to produce and market their work. In 2009, her work was selected to be a part of Aspects of Collecting; – an extraordinary art project on the occasion of the 10th anniversary of Essl Museum in Vienna, Austria. Manisha is a recipient of the prestigious National Award and the honorary title of Icon of Santafe, US.